“We are calling on (Graydon Smith) to do the right thing and fight like hell to get the bill rescinded.”

Climate Action Muskoka (CAM) and Almaguin Climate Action (ACA) say they have a message for the Parry Sound-Muskoka MPP and Minister of Natural Resources and Forestry.

And they hope to deliver as many personal letters of protest as possible.

CAM and ACA are uniting with a collective message next Friday, Dec. 9 in what they are calling a ‘Travelling Climate Rally’ from parts north and south in the riding. 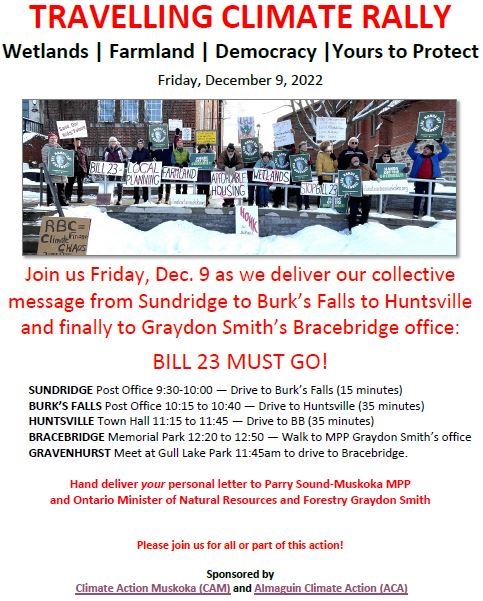 A joint release from them today says they want 23 repealed “to protect the biosphere, to allow municipalities to take climate action, and to ensure that citizens have a say in the future of their communities.

“We invite all concerned citizens and municipal representatives to join this event.”

Those joining from Gravenhurst will meet at Gull Lake Rotary Park at 11:45 p.m. to travel to Bracebridge to join the northern group there.

Everyone is welcome to join the rally at any point along the route.

They urge supporters to bring their own sign and :your personal written letter to our MPP.”

Members of the group will hand deliver the letters to Smith.

If you cannot join the event, email your letter or give your letter to someone who can attend.

The event is organized by Climate Action Muskoka (CAM) and Almaguin Climate Action (ACA). The two groups have requested a joint meeting with MPP Smith.

Leave comments at end of story