SIMCOE-MUSKOKA — Muskoka is a new hot spot for COVID-19.

The district has for the first time topped Simcoe — and Ontario — in the number of cases per 100,000 population.

Dr. Charles Gardner, medical officer of health, said today “Muskoka needs to be aware of that.”

And that residents should keep to their cohorts and continue with wearing masks in public indoors — and outdoors.

So it’s a good thing, he said, that the health unit has just now received its first shipment of the Pfizer kids vaccine.

Already 6,705 appointments have been booked for kids as of Wednesday. That’s among about 45,000 eligible children aged 5 to 11.

Upcoming vaccine clinics will focus on kids and those yet to receive first and second vaccines. Including kids aged 4 who turn 5 in 2021.

However, anyone eligible to receive a booster shot can still book an appointment.

All this as today 9 more people in Muskoka tested positive — 5 of them kids in Huntsville 0-17. In total 60 cases were reported across the region.

This follows 52 cases in Muskoka Since last Wednesday’s reporting.

Since Sunday this week there have been 33.

This is the fifth week that cases have risen Simcoe-Muskoka. Last week there were 415 and the week before 332 — a 25 per cent increase.

Dr. Charles Gardner said Muskokans “need to be aware” that the district’s number of cases per 100,000 population last week was at 81 — compared to 67 for Simcoe.

But Dr. Charles Gardner, medical officer of health, says that won’t mean more vaccine clinics in Muskoka. He said “equity” of access will remain the same as previously when Simcoe had more cases, but Muskoka received the same relative number of clinics.

And 37 were male, 23 females; 56 were sporadic and 4 from school or child care outbreaks.

As well, 28 per cent were under age 12 (mostly in school/care settings) including 9 of those in Muskoka.

One person in Simcoe died (among 3 there the past week).

Gardner said vaccine rates for those 12+ have gone up 1 per cent each for first and second doses the past week to 88 and 85 per cent respectively.

The MOH says to expect the 38 per cent of fully vaccinated people testing positive now to rise even as more people get vaccinated.

He did point out that health units in Kingston and southwestern Ontario, including Elgin and St. Thomas and in the north Sudbury and Algoma have also experienced increases.

Meanwhile, Gardner said November’s number of cases are almost the same as September and October combined.

And that since Oct. 1 there’s been a regular increase of 3.7 per cent cases.

That trajectory means that in two weeks there could be 100 cases per day.

He also noted that in the past eight weeks the number of unvaccinated people is an average of 13 years younger than those who are vaccinated.

As well, 20 per cent of people unvaccinated are under age 40 — but that nobody under 40 who is fully vaccinated is in hospital.

Yesterday Gardner issued two more “Letters of Instruction” to businesses and the community that in part said children 12+ must be vaccinated to participate in sports; and an order that anyone 18+ who tests positive must self isolate along with anyone else in their home is unvaccinated.

He also said attending big outdoor events like the Dec. 5 Bracebridge Santa Claus should be OK —  but as long as everyone wears their mask and takes reasonable distancing precautions. Otherwise, he said he said he hasn’t heard of any other health units having related problems. 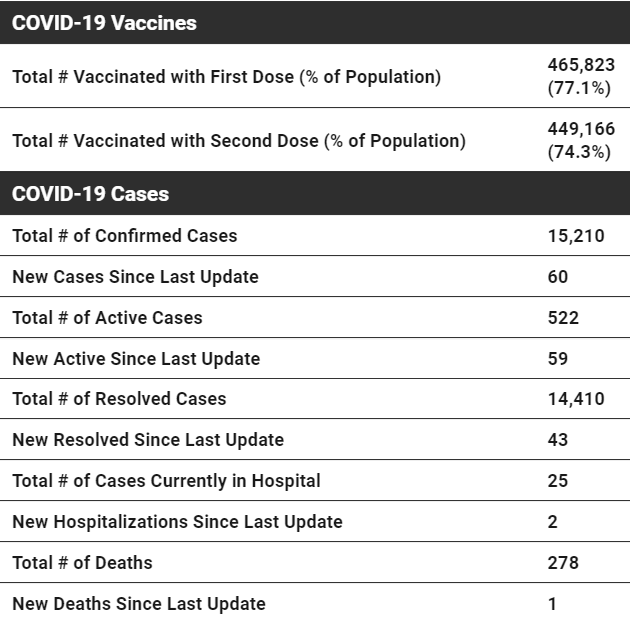 Leave comments at end of story

« HERE’S WHAT BUSINESSES AND NGOS MUST DO STARTING THURSDAY, FRIDAY » THIRD PERSON CHARGED THIS WEEK AFTER HUMAN REMAINS FOUND IN HUNTSVILLE SUNDAY